We can help you if your employer has made unlawful deductions from wages.  In other words, your employer owes you money for one of the following reasons: 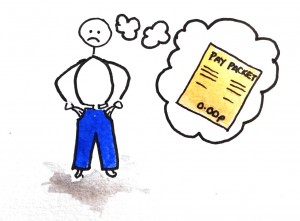 When can an employer deduct money from wages?

There are only three circumstances in which an employer can deduct money from wages.

Common examples of when an employer is entitled to  make deductions from your wages.

Unless your employment contract stipulates otherwise your employer is entitled to take money off your pay in the following circumstances.

How do you claim back money that your employer owes you?

If, after exhausting all the internal procedures within the organisation for which you work, you have still not been paid correctly then you have two options

Deadline for issuing a claim

Mrs Smith works as an assistant to a Managing Director in a marketing firm.  The nature of her work means that during the last year she has frequently had to stay late in order to finish work ready for the next day.  Mrs Smith’s contract states that she is entitled to be paid overtime once she has worked more than 40 hours a week. Mrs Smith has never been paid overtime and her employer is now refusing to pay her the additional pay to which she is entitled.

Mrs Smith has already submitted a formal grievance to her employer but is still not being paid correctly.  Mrs Smith may present a claim to a tribunal for unlawful deductions from wages.  Provided that the last time Mrs Smith was not paid was within the three month deadline her claim can include all the outstanding pay for the last year.

If, for any reason you believe that your employer has made unlawful deductions from wages and owes you money call us on [phonenumber] to discuss your case, or alternatively, fill out the simple form opposite and we will call you back at a time convenient to you.

Advertisement cookies are used to provide visitors with relevant ads and marketing campaigns. These cookies track visitors across websites and collect information to provide customized ads.

Analytical cookies are used to understand how visitors interact with the website. These cookies help provide information on metrics the number of visitors, bounce rate, traffic source, etc.

Performance cookies are used to understand and analyze the key performance indexes of the website which helps in delivering a better user experience for the visitors.