NEED TO SPEAK TO A SOLICITOR TODAY?
Please make an appointment below. Very low rates.

The government has published the final details of its proposals to allow fathers to share parental leave and statutory pay.  From April 2015, once a new mother has taken her compulsory two-weeks off to recover from the birth of her baby, the remaining 50 weeks may be split between both parents. 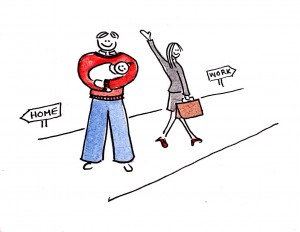 In the new proposals, the government hopes to standardise the opportunities of both parents to care for their newborn child by making shared paternity leave available to both parents, who will be entitled to split up the leave as they see fit.  In theory, a mother may return to work whilst a father takes the full 50 weeks leave to care for the new child.  In a bid to allay the fears of smaller firms it appears that employers will have to agree to the proposed pattern of time off and are entitled to reject requests for anything more disruptive than a continuous block with more than two subsequent changes.  Such measures have been put in place to prevent parents taking leave which would be overly disruptive to their employer’s business.  For example, taking alternate weeks off during the first year of their child’s life.

Why is the Government Introducing the New System?

The government is hoping to kill two birds with one stone with the introduction of shared parental leave:

1.  The hope is that by allowing mothers to return to work women, who in some cases struggle to regain momentum in their careers after a break to have children, will be prevented from being held back by old-fashioned notions of primary child caring responsibilities.

2.  It will give fathers the option to have a more hands on role in the care of their very young children.

Nick Clegg, the deputy prime-minister has dismissed the current situation as Edwardian, and stated

“Women deserve the right to pursue their goals and not feel they have to choose between having a successful career or having a baby.  They should be supported by their employers, rather than being made to feel less employable or under pressure to take unchallenging jobs.”